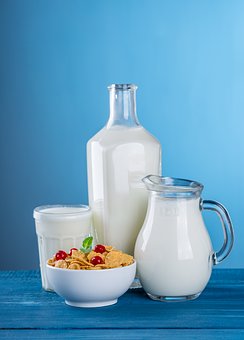 Human breast milk is no doubt number 1 milk on earth for our babies. If speaking about ranking for milk based on its nutritional value needed for newborn babies for their growth and development, cow’s milk is the second choice in the listing.

Lets look at types of milk. Is cow’s milk similar or close to breast milk? I have written an article about breast milk before, you can access it through the link here. I will be sharing with you the different types of milk other than human breast milk and their pros and cons. 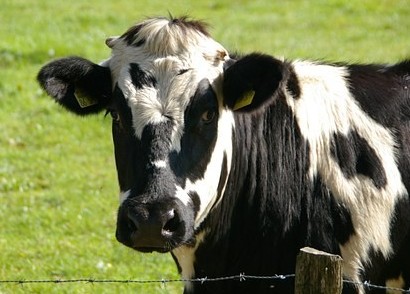 Cow’s milk is well-known as a second alternative to breast milk for babies. For some reason, it is the first choice when breastfeeding is not possible. Human needs all the micro and macro nutrients for bone growth which is critical during the infancy and childhood stage.

Milk is the only food source for babies during their first 6 months and accompanied with solid food until 1 year old. Cow’s milk has most of the nutrients needed for healthy bone growth. It is a good source of calcium, magnesium, phosphorus, potassium, selenium and zinc, rich in vitamin A, D,E ,K,B1 (thiamine), B2 (riboflavin),B6,B12, contain lactose as source of carbohydrates, protein, and fat.

Plain cow’s milk contain high casein protein (whey and casein as a protein source in cow’s milk) which is not easy to be digested by young babies. Most baby formulas are derived from cow’s milk protein. Untreated plain cow’s milk is not suitable for babies who are below 1 year old due to their immature digestive system. Therefore, cow’s milk needs to be further processed into infant formula.

Usually plain cow’s milk contains small amount of iron. Introduce plain cow’s milk to young babies too early may cause iron deficiency disorder. Unpasteurized cow’s milk is not advisable to be given for young children as it contains harmful bacteria such as E. Coli, Salmonella and Listeria, may pose high risk of food borne diseases. So far, besides breast milk, infant formula is the only milk product which is nutritionally acceptable for babies under 1 year old. Most of the infant formula contain cow’s milk as the basis. Some manufacturers design the infant formula with additional essential ingredients.

Example, some infant formulas are fortified with Vitamin D, nucleotides, lutein, DHA & ARA, iron and etc, make them more acceptable for children’s growth and development. All the infant formulas are regulated and adhered to Food and Drug Administration (FDA) guideline. Therefore, we shall not be worried too much about their nutritional value to our babies growth. Pasteurized cow’s milk can be given to babies who are more than 1 year old. As long as no adverse effect to your babies after having pasteurized cow’s milk (like diarrhea, blood in stool & eczema) accompanied with sufficient healthy solid food.

Can you substitute cow’s milk in babies diet?

For babies above 1 year old, you can find other substitute of cow’s milk in babies diet. Example, 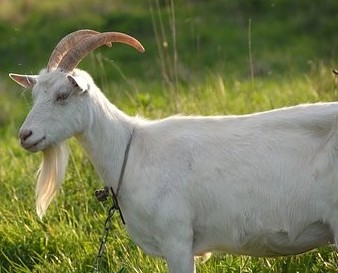 There is also the downside of it. Goat’s milk is higher in sodium, chloride and potassium which maybe too high burden to your babies and lead to poor growth. Goat’s milk also lack of folic acid which will eventually lead to megaloblastic anemia. Some manufacturers produce goat’s milk formula and can be found in the market. Infant formula derived from goat’s milk and fortified by adding other essential ingredients mimic to breast milk. Among the brands are Kabrita USA, Holle Goat, NannyCare, Sammy’s milk and Karihome.

Always consult your pediatrician before you choose this type of formula for your young babies. Some babies are unable to digest goat’s milk protein and have allergy reaction to goat’s milk too.

Because of additional of sugar and oil, some plant-based milk may have higher energy content and potential risk of type I diabetes. Therefore, minimal additives would be a wise choice. Most plant-based milk are lower protein content. As long as the babies are starting their healthy solid food and there is no reason why plant-based milk cannot be given to babies who are more than 1 year old as a healthy beverage.

Soy milk is the first in the list when it comes to plant-based drink for infants. It is an ideal plant-based substitutes for cow’s milk for those who are vegans, lactose intolerance, cow’s milk protein allergy and galactosemia. For young infants, most soy milk are processed into infant formula, fortified with essential nutrients need for babies’ growth. Usually Pediatricians will only recommend soy milk formula for those who has the medical condition like galactosemia, lactose intolerance and allergy to cow’s milk protein. 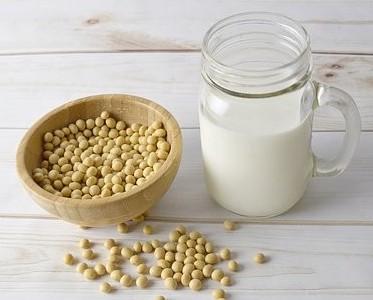 Soy milk is the only plant-based milk which contain higher protein than other plant protein and more similar to animal protein. It has become popular drink globally as its nutritional value are made close to the dairy milk nowadays. Soybean is a good source of vitamins and minerals. High quality protein, essential fatty acid, calcium, iron, and their minerals are easily absorbed by our body. There are also evidence soy milk can be safely consumed by all age groups including children.

The downside is soybean is also one of the 8 food allergens. Some babies allergic to cow’s milk may potentially allergic to soy milk. Some people concern about soybean contain isoflavones which is a type of phytoestrogens may have hormonal effect in children. More long term investigation need to be carried out on the exposure of estrogen-like compound found in soy milk.

Almond milk is another plant-based milk which is quite common alternative for adult. For young infants, only breast milk or cow’s milk infant formula or soy milk formula (under special medical requirement) to be given for their growth and developments. Almond milk is a good source of calcium (higher than cow’s milk) for healthy bone, teeth and growth. Almond milk can be one of the healthy drink especially for children who are cow’s milk protein allergy and lactose intolerance. 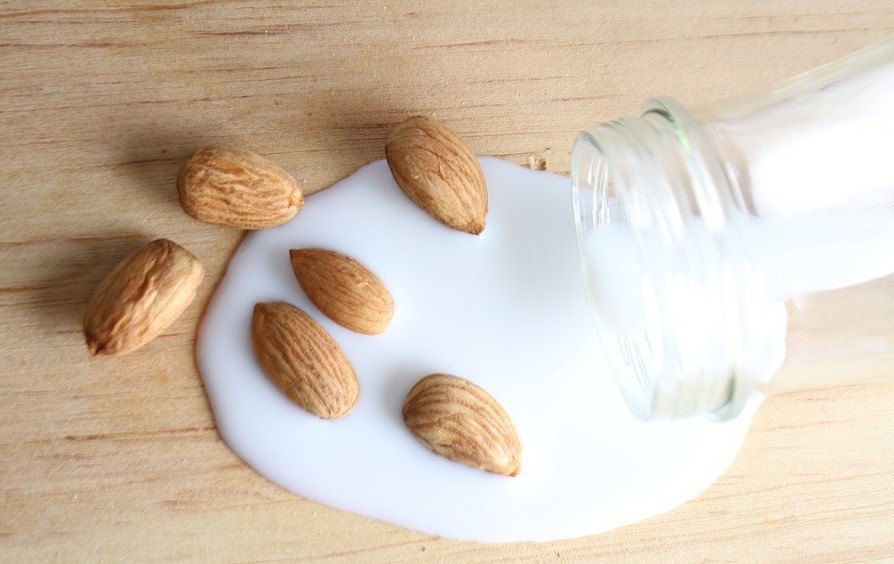 Almond milk contain much less protein and fat content, therefore, it should not be given as a replacement of breast milk or infant formula during the first year. Almond milk is a healthy drink option for babies after 1 year old. Once babies are having healthy solid food, they can get enough protein or fat from their diet.

Some babies react to nuts or almonds too. Almond is also one of the 8 food allergens so give your children a little at a time to see whether they are allergic to almond milk.

For more healthy option, look for almond milk which is fortified with vitamins and minerals and low in sugar.

Oat milk is also one of plant-based milk which has become more popular recently. It is a good choice for children who are allergy to cow’s milk protein and lactose intolerance. It’s naturally free of lactose, nuts and soy and vegan-friendly milk. Commercial oat milk is fortified with calcium, vitamin A, D, B2 and B12, rich in fiber too.

Like most of the plant-based milk, oat milk has less protein content. Again, oat milk is not a replacement of breast milk or infant formula for babies less than 1 year old. You can give oat milk to your babies supplemented with healthy solid food to accommodate essential nutrients for your children growth.

No worry about having allergy to oat milk as oat itself is not an allergen. Sometimes, babies have problem digesting gluten. Look for one which is unsweetened, gluten free and fortified with vitamins and minerals can be an ideal healthy drink for your babies.

Another downside is usually commercial oat milk can be more expensive than cow’s milk.

Rice milk is a plant-based milk which is made from grain (rice). It contains more carbohydrates, extremely low in calcium, protein and fat. Lactose free make it an option for those who are lactose intolerance.

However, it is not a replacement for breast milk or infant formula for babies less than 1 year old. One concern on consuming rice milk is about the contamination of inorganic arsenic in rice milk.

Of course, if you have other plant-based milk available around you, and rice in Asian family is a common daily food, I do not see any reason why you have to offer your children rice milk again in their diet.

Exclusive breastfeeding or infant formula feeding with standard cow’s milk formula are recommended for normal healthy babies under 1 year old. Always consult your Pediatricians before consuming other milk substitutes and only offer them after they are more than 1 year old as a supplement drink, accompanied by healthy solid food.

Drop me a comment in the comment box below to share your opinion about giving your child substitutes of milk other than breast milk and cow’s milk formula. Is it necessary to offer them other substitute of milk for their growth? I would love to hear from you.